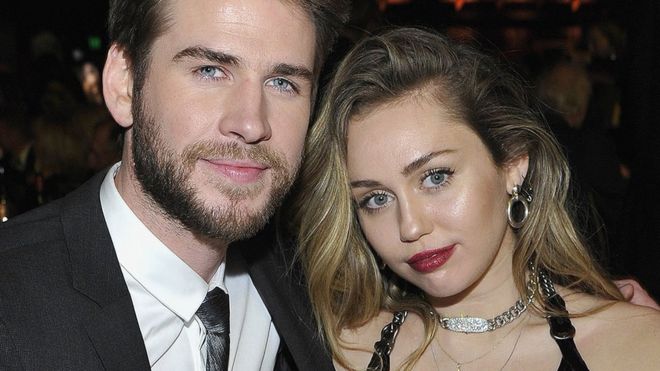 Miley Cyrus, who identifies as pansexual, says gender is almost “irrelevant” in modern relationships, like hers with husband Liam Hemsworth.

She says the couple are “redefining” what it looks like for a “queer person” to be in a heterosexual relationship.

Pansexual people, like Miley, are attracted to individuals regardless of their gender.

“People fall in love with people, not gender, not looks, not whatever,” Miley tells Vanity Fair magazine.

“Relationships and partnerships in a new generation – I don’t think they have so much to do with sexuality or gender.

“Sex is actually a small part, and gender is a very small, almost irrelevant part of relationships.”

Miley adds that being part of the LGBT community is something she’s proud of.

Other pansexual people in similar relationships have praised Miley for using her platform to share a message about modern sexuality.

‘Who you’re with doesn’t fundamentally change who you are’

“Miley is someone I can look at see that she’s my contemporary and she’s really open,” says Maggie Baska, a US-born 26-year-old who is pansexual and married to a man.

“It will encourage all her fans to not feel ashamed because even if they do get married, what’s going to happen? You’re just with someone, that doesn’t change who you are fundamentally and that’s a really beautiful message.”

Before meeting her husband, Maggie dated both men and women.

Maggie says being pansexual brings her and husband closer together.

“He can appreciate whoever he wants, because I appreciate that form as well,” she says.

Most recently, Maggie and her husband found they shared a mutual attraction to Lady Gaga.

In Miley’s interview, she says her attraction to Liam is more “spiritual” than it is sexual and that’s something Maggie relates to.

“I want to come home to someone and I’ve never gotten bored of that person, it’s me saying this person is the one I want to be with, regardless of who they are,” she says.

“I just connect with them personality-wise.”

‘Attraction and relationship is separate’

And Maggie says the approach she, and Miley, take toward openness in their relationship could be applied to any any relationship – regardless of sexuality.

“It’s the benefit of being able to have that open communication to say yes, all bodies are beautiful,” she says.