Home  »  Eyes   »   ‘He pulled the wool over our eyes’: workers blame Trump for moving jobs overseas 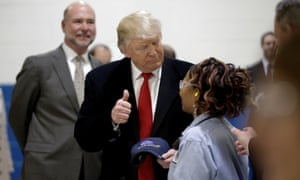 Next Friday, Eddie Martin will work his last day at the General Electric plant in Salem, Virginia, after working there for seven years.

GE announced in June last year it was shutting down the Salem plant, which opened in 1955. More than 250 employees were affected, as those jobs will be sent overseas to India. Martin is one such employee.

He says: “It’s horrible. You have over 200 people losing their jobs just so the company can build a $200m plant in India and pay those people $3.50 an hour.”

Martin plans to go back to school and work in marine mechanics. He says: “This has left a bad taste in my mouth. I will hopefully never work in manufacturing ever again.”

Promises to save US manufacturing and prevent American jobs moving abroad were a key part of Donald Trump’s 2016 campaign. But since Trump took office in January 2017, nearly 200,000 jobs have been moved overseas, based on Trade Adjustment Assistance certified petitions.

That includes firms doing business with the US government. According to research by Good Jobs Nation, 14,444 jobs were moved abroad by the top 100 federal contractors in the United States in Trump’s first two years in office. The rate of “offshoring” among the top 100 federal contractors actually exceeds rates throughout the Obama administration and the majority of the Bush administration, aside from 2008 when the economic recession hit.

Harley Shaiken, a labor professor at UC Berkeley, says: “There has been relatively little change since Trump took office. Plant closings are devastating. For the worker, it is damaging and it can create the kind of stresses that cause divorces, break up families, and disrupt the ability to care for parents or young children. This kind of disruption creates far-reaching anxiety and anger and we saw that politically expressed in 2016.”

That leaves workers like those at the Virginia GE plant with a feeling of being lied to as they watch their livelihoods disappear.

“It’s taking away a livable wage in the area,” says Darryl Castillo, who worked at the plant for six years and will be among the last wave of layoffsscheduled for early December.

Castillo was involved in union negotiations to try to prevent the plant from closing, but the union’s concession offerings to save GE money ended in failure. He says: “It really didn’t matter what the number in savings was. They were going to close it no matter what, and that was very disappointing. They gave us a general hope of ‘help us help you to keep it open’ – but it was a bold-faced lie.”

GE confirmed the Virginia jobs will be outsourced to India. “This action is difficult and does not reflect the performance, dedication, and hard work of our employees,” a spokesperson said in an email. “We remain committed to work with the union to support affected employees, nearly half of whom are eligible for retirement.”

For some of the tens of thousands of workers affected by plant closures and job offshoring across the United States, Trump’s 2016 promises to save their jobs and stop their plants from closing have left a sense of betrayal.

“I believed it. I thought he was going to save some jobs. He pulled the wool right over our eyes and he’s still doing it till this day,” says 58-year-old Susan Cropper, who worked at a Carrier plant in Huntington, Indiana, for 31 years before the plant closed and she was laid off along with over 700 employees in March last year.

After being laid off, it took her eight months to find another job, but it pays much less than what she was making at Carrier. “Not only did I lose my job, now I’m not going to work long enough to build another retirement somewhere else,” she says.

Trump had promised throughout his presidential campaign to save the nearby Carrier plant in Indianapolis, which has laid off hundreds of workers since he made a deal with the company in December 2016. The deal was supposed to prevent those jobs from being sent abroad to Carrier’s plant in Mexico.

“I gave the best years of my life to that corporation that threw me out like I was a rag doll,” Cropper adds. “Carrier was rewarded with more government contracts, tax breaks, and the executives get to keep their lifestyle and line their pockets. It’s been a really unfair process.”

Carrier did not respond to multiple requests for comment.

During a presidential campaign stop in Burlington, Iowa, Trump declared: “I will be the greatest jobs president that God ever created.” But critics claim that when it came to stepping up to prevent a Siemens turbine plant from closing in Burlington in December, Trump was nowhere to be found.

“I sent a letter to the White House and got a response that this is a state or local matter, so they brushed us off,” says 64-year-old Robert Morrison, one of 125 workers who were laid off when the Burlington plant closed. “We felt abandoned and betrayed not only by Siemens, but by our elected officials, from Trump down.”

According to Morrison, many workers either moved away or took jobs with pay cuts and long commutes. He was forced to retire early.

“This was my job of 31 years. I loved that job,” he says. “I was hoping my son or grandson and nephews could work there some day. We made a fantastic product used around the world. Now the turbines are going to be made in India and Czech Republic.”

A Siemens spokesperson said the plant closed because of market decline.